Last month an essay of mine was published in the Journal of Brethren Life and Thought. Since that journal is probably not one that will be showing up in your mailbox anytime soon, I thought I’d included a bit of it here. The piece is based on a presentation I gave some years back; I’m happy to see it in print.

Simplicity strikes many of us as a good, if occasionally naïve, thing. In his “A Salutation of the Virtues” the thirteenth century saint, Francis of Assisi, cast Simplicity as a courtly sister to Queen Wisdom, outranking Lady Poverty and Lady Charity. In the twenty-first century we may well be intrigued by Simplicity but we probably lack the saint’s solemn devotion. Consider the TV reality show “The Simple Life,” which cast socialite Paris Hilton in the role of a farm worker. The foibles of the out-of-place heiress generated spinoff shows around the world. 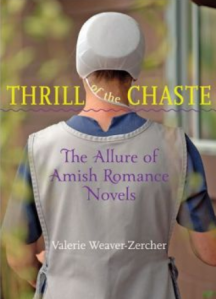 The irony of simplicity’s attraction in a complex and fragmented time is captured in Valerie Weaver-Zercher’s marvellously titled book Thrill of the Chaste: The Allure of Amish Romance Novels. There Weaver-Zercher explores the growing American fascination with “bonnet rippers.” She relates that in 2002 only two such books were published. In 2012 there were 85.[1] This growth betrays, she thinks, a desire on the part of readers to be transported from a hypermodern and hypersexualized present to a simpler way of life. Weaver-Zercher is not alone in her analysis. Sociologists Donald Kraybill and Carl Bowman offer a corroborating conclusion about our cultural fascination with plain living. In a book about Hutterites, Mennonites, Amish, and Brethren they write,

Despite all our comfort and convenience, the possibility that [members of these plain communities] are happier haunts, indeed, torments the postmodern soul.[2]

It is this contemporary fascination with the plain, with the simple that prompts this essay. I intend to contribute something particular to the conversation about simplicity, that is, to reflect on it specifically as a virtue. It is important, then, that Kraybill and Bowman believe the postmodern soul is haunted by plain communities because of the possibility that they might be happier. Aristotle believed that virtue was necessary for eudaimonia, for happiness, flourishing or well-being. The happy, flourishing life requires a bit of luck, true, but it cannot come to be without the development and maturity of virtue. In this essay I want to locate simplicity as a moral value within the Christian tradition, show why it is helpful to define it specifically as a virtue and sketch an argument for the way it infers from the life of God.

Reflecting on simplicity in the context of plain communities likely brings to mind various peculiarities related to clothing and technology. Here I intend to broaden the concept, though I want to do so without losing it in the spiritual ether.  For these purposes let us think of simplicity as a virtue pertaining to our acquisition and use of material possessions. Plain communities rightly remind us that attention to such matters is important.

The crux of my proposal is the suggestion that approaching simplicity as a virtue is more helpful than thinking of it as a set of rules that must be defined, updated, and enforced.

The virtue of simplicity stands between the extremes of ostentatiousness and austerity. The ostentatious person views material goods as an avenue for displaying power and prestige. The austere person views material goods as useful only in their renunciation. The former fails to recognize that goods may exist beyond those of this life and later ignores the possibility that the goods of this life may be goods at all. As with all virtues locating the action that most fittingly exhibits simplicity in any situation, the golden mean, is a matter of practical wisdom. In some situations simplicity will appear closer to one extreme than the other. But that is all to look quite far ahead, let us first give the discussion some contemporary orientation.

Commending simplicity as a virtue is a bit like doing the same for peacemaking. Stanley Hauerwas has taken on a significant challenge in his argument that peacemaking is a central virtue of the church. He reasons that Christians are to be peacemakers because God is. Peace represents the teleological intent of redemption and traces the deep contours of the universe.[3] I am trying to create something of a parallel argument, to show that the cultivation of simplicity enables us to rightly order our lives and more fully realize our nature. That is to say, both ostentation and austerity fail to exemplify human excellence. We should understand and the term ‘nature’ here the way Dietrich Bonhoeffer would. In his Ethics Bonhoeffer describes the natural as “that which, after the fall, is directed toward the coming of Jesus Christ.”[4] Human nature is revealed in Jesus and the virtues are those qualities, skills, and traits of character that enable us to live into this form. The form of Jesus reveals what John Howard Yoder describes as the “grain of the universe” and ultimately the telos of the human species.[5]

Kathryn Tanner, Mark Husbands, and others are right to question how there could be a human analog for the divine relations. It is presumptuous to think that we might relate to others as the members of the Godhead relate. Tanner provides a strong alternative when she argues that God’s model for human sociality is presented in the incarnate Son, not the immanent Trinity.[7] Those growing in virtue require models. The atoning work of Jesus is surely more than being a moral example, but it is not less. This makes the teachings of Jesus more than just another set of biblical injunctions. It is important too that Jesus regularly teaches through parables. Jesus, an interpreter of Torah, presents human excellence through stories and heuristics, not through a timeless list of detailed codes describing how one ought to acquire and deploy material possessions. This makes simplicity available to local inflection and less vulnerable to the temptation of legalism.

Yet there is more. The Rule of Faith reminds us that apprehension of Christ always occurs within Trinitarian context. We do not know Christ outside his relations with the Father and the Spirit. In Jesus’ prayer for his disciples in John 17:20 he asks “As you, Father, are in me and I am in you, may they also be in us….”[8] In Christ, to reference a central Pauline phrase, we are drawn into communion with God and enabled to share in the divine life. The vertical dimensions of the atonement are inseparable from the horizontal. This follows from the greatest commandment of loving God being linked to the second, which commends love of neighbour (Luke 10:27). It is why as well the final verses of 1 John 4 warn readers that it is impossible to love God and not love our brothers and sisters. Thus in a spiritual sense, though certainly not a divine sense, as humans participate in Christ they dwell one with another, they are part of one body. It is this dwelling one with the other in love that precludes the disparagement of the other entailed in the ostentatious person’s display. This in tandem with the blessing of the material world affirmed in the Incarnation, which makes austerity untenable, are the theological brackets that orient simplicity.

In the sure anticipation marked by the Spirit’s presence we are invited to practice now the unity that will be one day be unavoidable. Without giving us a precise social program or a set course of cultural forms the triune life of God does have bearing on the Christian life.

The link between the perichoretic character of the divine relations and our own is not a shared order, but an eschatological movement, the pull of redemption toward consummation, and with it our sinful isolation into blessed community. Through Christ, in the power of the Spirit we encounter each other in ways made new. Exemplary lives of simplicity such as those of John Woolman or Saint Francis come into focus as a mode of being that acknowledges solidarity with those whose lives connect to ours through our use of material goods. The virtue of simplicity then enables the joy of connection with others. When we release ourselves from the need to be richer than our neighbors, we are less pressured to ignore the implications of our economic practices. We engage our neighbours in the marketplace on the basis of our shared future in God. The virtue of simplicity also enables the joy of unmediated connection with the natural world. When we let go of the modern obsession with insulating ourselves form the contingencies of existence in this world we gain the vividness of creaturely life.

Simplicity is a component of the good life because of the redemptive activity of God, not because holiness is linked to an unbending cultural code. The logic here roughly parallels the way the sixth-century philosopher Boethius understood the relationship between God’s knowledge and human freedom. Boethius argued that God’s knowledge is dependent on the nature of divine perception, not on the fixedness of events which human knowledge requires. His point was that God could know the future without that knowledge precluding our freedom to choose one thing or another. If it is indeed appropriate to speak of simplicity as a Christian virtue then the life lived with excellence is one where material goods are enjoyed with an appreciative deliberation and one where these things are deployed in response to the destruction of walls of hostility. Because God lifts up humanity and draws us toward our true selves we can order our lives according to what is of ultimate value, dispensing with unnecessary hierarchies, pretension and sensuality. Simplicity does not require the denial of desire or the rejection of material things on the basis of their transitory nature; rather, it calls for the growth and maturity of desire.

Simplicity does not call for a rejection of beauty; rather, it calls us to order our lives simply and directly because we are drawn to the beauty of God.

We confess that though there is much in this world that reflects divine glory, not everything to which we are drawn truly does. To grow in the virtue of simplicity is to grow in the wisdom and character necessary to appreciate the difference.

[8] All biblical quotations are from the NRSV.