Here are a few lines from Annie Dillard’s book Holy the Firm:

Who shall ascend into the hill of the Lord? Or who shall stand in his holy place? There is no one but us. 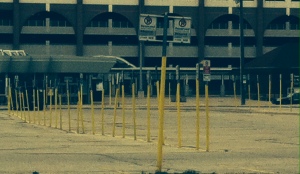 There is no one to send, nor a clean hand, nor a pure heart on the face of the earth, nor in the earth, but only us, a generation comforting ourselves with the notion that we have come at an awkward time, that our innocent fathers are all dead—as if innocence had ever been—and our children busy and troubled, and we ourselves unfit, not yet ready, having each of us chosen wrongly, made a false start, failed, yielded to impulse and the tangled comfort of pleasures, and grown exhausted, unable to seek the thread, weak, and involved. But there is no one but us. There never has been.

On this, the Sunday before Easter, we remember Jesus’ triumphal entry into Jerusalem. If you let yourself sink into this ancient story you can sense its significance. It is the moment when you think maybe everything will be alright for Jesus. He has been doubted and misunderstood. Very few people have recognized the significance of his life. Now, finally, it seems he gets some recognition in the capital city. Finally, he makes a splash and he gets noticed. He is celebrated. It’s like the little independent movie nobody believed in that finally becomes hit at the film festival.

When Sarah and I lived in Toronto we would sometimes look to rent films that had been chosen to screen at that’s city’s major film festival. They would, I believe, usually have some special seal on the case. This was in the days when you still had to go to a rental store to get a movie. We once rented a film festival selection and found it unwatchable. The camera work was so wobbly it made us nauseous. We returned it and asked for a refund. The clerk told us that we probably just didn’t understand what the producer was trying to do. I don’t remember if we got a refund or not. If we did, my decades-long hope is that we rented a Transformers movie.

Back to this little film about Jesus—and back to Jerusalem. Jesus gets the red-carpet treatment. It’s cloaks and branches actually. 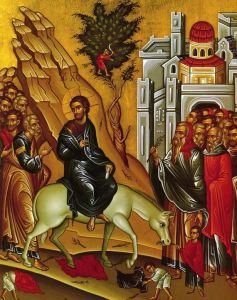 The idea is that he’s greeted as a king. At this point we should notice that the account in Matthew doesn’t actually say it was the children who greeted Jesus. In fact, none of the gospel accounts put it this way. In Matthew it isn’t until the following story, when Jesus reclaims the temple as a place of prayer, that the children are said to have shouted ‘Hosanna!’ Matthew says those who greeted Jesus, were simply the ‘crowds’. Luke, whose goal as a writer might be closest to what we think of as that of a historian, simply refers to ‘people’ or ‘disciples’. Matthew’s point was that Jesus was being welcomed as a new king. The children might have been there, but the serious and aged were too.

Jesus was welcomed as a king in the line of David, unlike the governor of Judea at the time. Maybe the mood was like that of a crowd marching to deny the legitimacy of a president or a prime minister. To ride into to Jerusalem and be greeted as the ‘Son of David’ and as one who ‘comes in the name of the Lord’ must have opened up a similar sense of instability.

And as the gospel writer describes it, Jesus didn’t just ‘take this in stride,’ as we sometimes say. He instigated it. He asked to ride in like a returning general. This is a performance. It is one where Jesus claims the title of the messianic king and mocks the self-glorifying way of most leaders. Jesus rides on a humble service animal, a donkey, and skips the manufactured glory of the conqueror on a huge war horse.

As we read this story it should sound political. The political edge is part of what got Jesus in trouble. It is part of the reason the Passion story does not end here—but actually just begins. Jews in the first century only had so much allegiance to go around. If they gave some to a new leader, they took it away from the old one. The same is true of us.

Yet, this is not only a political encounter. Just as Jesus enacted his kingly identity in this story, in following chapters he would go on to talk about himself as the ‘Son of Man’ returning in ‘clouds of heaven with power and great glory’. In fact it’s this claim, as Matthew tells us in chapter 26, that so enrages the high priest that he calls an end to Jesus’ trial. Jesus was guilty of blasphemy. The court said he deserved to die.

Jesus’ triumphal entry begins to make all this a distinctly public matter. It was only a few chapters prior when some of the disciples saw Jesus gloriously transfigured that he told them to keep the whole thing quite. He would remain the undercover boss. At the triumphal this changes.

This is the story from Matthew’s Gospel. But where are we in it?

Let me offer a suggestion captured by the response of the crowds. After all, Jesus could have ridden in to Jerusalem on a Harley Davidson and if nobody noticed or if nobody said anything the city would not have been thrown into turmoil. It was the response of these people in the streets that destabilized the system. The crowds raised the question of true leadership and true authority.

Let’s think of the people’s response in these simple terms: they made a proclamation. It’s what we might traditionally call a confession. That is, they stated openly and plainly that they believed something to be the case. Out of the word ‘Hosanna’ they made a declaration. They placed their hope in Jesus.

One of the defining features of our Anabaptist take on Christianity is our emphasis on this personal declaration or confession of faith. This is why baptism is so important for us. It’s the way we make this initial public statement. It’s our response to God’s grace. It’s also the church’s way of welcoming us into a community built on that grace.

Think of how common public declarations are here in Ottawa. Think of protest marches.

They all include public declarations of one sort or another: “Solidarity against Islamophobia,” or “Climate Change is Happening Now,” or “Women’s Rights are Human Rights” or “Refugees are Welcome” or “Austerity Harms the Poor” or “Pass Bill C-262.”

We know the power of such statements. And we make such statements quite regularly. We are for the most part happy to tell the world what we believe because we know it can change things. People can gather, they can do stuff—but until they boil it down into a simple declaration it doesn’t have much of a public impact.

The core declaration in the New Testament, the protest slogan of this part of the Bible, is the simple phrase ‘Jesus is Lord.’ It shows up directly in Romans 10, but in other ways and other forms it’s all through the New Testament. Quite simply, to be a Christian is to agree with that claim. It’s to agree that Jesus is the one in charge. It’s his opinion that matters. Jesus is Lord.

Our gospel reading this morning draws our attention to a different declaration. This is one that comes before the crucifixion and before the resurrection. It’s all caught up in this one word, ‘Hosanna’. ‘Hosanna to the Son of David!,’ the crowds say. ‘Hosanna in the highest heaven!’ ‘Hosanna’ can literally mean something like ‘save us!’ or it can be a more general exclamation of praise.

It’s that curious proclamation that sends the city into turmoil. The Swiss theologian Karl Barth is one of those who sees the act of making a confession or a declaration as central to the faith. He makes a helpful observation about claims like these: he tells us that a true declaration of faith or a declaration of allegiance to Jesus makes little sense to those who don’t agree. Barth says a true confession always has a ‘risk of being ludicrous.’ (CD, III.4, 78)

To shout ‘Hosanna!’ when a poor son of a stone mason rides a borrowed donkey into the city would have seemed odd. This central aspect of the Christian faith—this making a declaration, this finding our true protest chant in response to the state of the world, this can seem odd. But think about it. If the declaration we make makes immediate sense to everyone it makes no difference.

How do you destabilize a system? You stop believing in the authorities. It’s true politically and in another way it’s true personally.

Here’s what I mean. If you’ve ever been to see a cognitive behavioral therapist to help you deal with anxiety, depression or even anger it’s possible that they used a little acronym to help you change your thinking. I believe it was developed by Albert Ellis. It uses the first four letters of the alphabet, ABCD, to help you reframe your view of things.

‘A’ stands for the activating event. What was it that triggered your anxiety or anger?

‘B’ stands for your belief system. What did you believe happened? How did you interpret the event?

‘C’ stands for consequences. What did you do? How did you feel?

And finally the ‘D’, which is the key step. The ‘D’ is a reminder to dispute your interpretation of the event. Is it possible that you misread the intent of the person who laughed at you?

It’s only an analogy but I think reading the Bible can be an opportunity for a similar process. Unless we insist on standing in judgment of it, the biblical witness to Jesus beckons us into the fourth step—D, disputing our view of things. This passage, and many others, offers us a chance at some critical self-awareness. Why, for instance, do we find it easiest to think that only the children should shout Hosanna? Why are we reluctant to make a declaration of faith when we make serious declarations in so many other areas of life? Might it not be that for us to move forward in faith God is giving us the chance to respond once again to Jesus? This is the intent of Lent.

How do you destabilize a system? How do you bring in some nourishing turmoil—to your city, your friendships, your own self-perception, your view of God? I think you watch Jesus ride into Jerusalem and into suffering, to cast himself into the mercy of God for nothing but love of God and love of neighbour. You watch that and you see if maybe you too can find it appropriate to shout from the soles of your feet: ‘Hosanna!’ That will be enough. Things will change.

Oh God, may it be so—Hosanna!