This past Sunday our congregation here in Ottawa had a special service celebrating the role music has in this church and in worship generally. Music can do a lot for us. Think about something as specific as the way we understand the Trinity.

I’m reminded of the work of Jeremy Begbie, a theologian and professionally trained musician. He says that for centuries Christians have tried to think of the Trinity visually. This hasn’t been very successful. We can’t readily depict two things sharing the same space at the same time and not being muddled into something entirely different. With music, though, Begbie thinks we can do better.

When he gives talks on this subject Begbie will strike one note on the piano and then another. We can’t see two things in the same place at the same time, but we can hear two notes at the same time. Of course we can stretch this to include a third note: three sounds, same place, same time. If we strike the right ones we even hear harmony, unity in distinction. Maybe this is a better way to think about God’s triune nature. At the very least, it’s a way for us to experience the unity in distinction that characterizes peace. 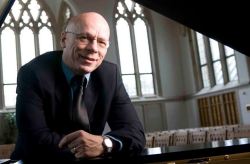 Begbie adds that when we string notes together over time, the sound alone can let us feel pain and grief, yet pull us through toward a sense of resolution. Music can make us wait. It can cultivate the virtue of hope.

In a church music isn’t only something that we hear. It’s also something that we participate in making. Some have said that the act of singing together, not the sound produced so much as the act of singing, can be morally formative as well. As we sing with others we find our place alongside them. We respond to their volume and their timing, and they to ours. We all have to sing out if we are to enjoy a full and vibrant sound. Tell me that isn’t a lesson in loving our neighbour as we love ourselves.

But music doesn’t just do things to us, it also lets us express ourselves to God. Music lets us add a dimension to the poetry of a song lyric. So, in the beginning of Psalm 96 we read, “O sing to the LORD a new song; sing to the LORD, all the earth.” Music has been a part of the Christian faith since well before it was born. The gospel passage we were given to read on Sunday, the middle part of Matthew 22, doesn’t address music directly, but it does show us something significant about worship. Music is an important part of any Christian community’s worship.

In Matthew 22 we read about how the religious and cultural leaders—the social gatekeepers—were trying to trap Jesus. They wanted to put a question to him that would require him to anger one group or another. So they ask him if it is appropriate to pay taxes to the emperor. If he would give an outright ‘yes’ to the question he would be seen an endorsing the occupying imperial forces of Rome. He would be, not a corporate sellout, but a sellout to the empire. Had he said ‘no’—don’t pay taxes to the emperor, he would be advocating insurrection. That would have meant the end of his ministry. The empire was not tolerant of this kind of behavior. With no qualms against using torture, especially against non-citizens, the empire snuffed out those who questioned its authority. 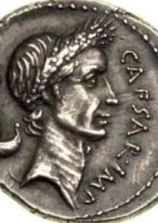 But what does this have to do with worship?

A while ago some generous folks gave me two tickets to a hockey game. It was the regular season, but still, Ottawa was on the losing end of a competition with Pittsburg. That’s a sore subject around here. While you have that picture in your head, though, let it play out a bit.

What happens when the home team scores or when the home goalie makes a great save? Don’t think too hard. It’s not a trick question. The answer is, people cheer! They—we—get up out of our seats and we yell, we clap our hands. We express thanks. Without holding back. What we’re doing, if we can switch to the language of faith, is we are glorifying the play. We are expressing what we feel in our hearts: that what we just saw was a thing of beauty, a work of excellence, something that made a difference. And so we praise it. Not because we have to.

In sports we give our praise to someone or something without feeling at all like it is being pulled out of us. It doesn’t feel like it is our parents dragging us out of bed for church or like it an alarm clock going off an hour early so we can get to the airport, or like those volunteer hours we simply have to do in order to graduate. When a goal is scored, when the other team’s quarterback is sacked, or when the symphony just nails it or the cast has pulled you into a different world . . . . When those things happen to us, giving those responsible the praise they deserve is exactly what we feel like doing. It takes no effort at all. In fact, it often feels like we would be making a mistake to not clap or cheer or ‘glorify’.

So when the poet of Psalm 96 says, “sing to the LORD, all the earth,” or when he encourages us to declare God’s glory among the nations, or to ascribe to the LORD glory, or to “worship the LORD”—when we are encouraged to do that, we don’t have to think of it as one more obligation. Very few of us need another obligation, another thing we have to do.

There is a sense in which worship is work. That’s what the word ‘liturgy’ means. But it doesn’t need to be the kind of work that’s forced. We do a lot of work for entirely pragmatic reasons: to get a paycheck. That is just the way it is. But that isn’t the heart of our worship together. That shouldn’t be the central feeling when we praise God with word and music. If we’re doing it right our worship comes from a deep sense of awe. That doesn’t mean we don’t yell at God sometimes. Remember our reading last week: how Moses called God out for a potentially devastating PR move (smiting all the Israelites)? There is no problem with bringing our anger and frustration to God. God is not going to get offended.

Nevertheless, the driving energy of worship isn’t that. It can’t be for long. The energy that drives our worship and our praise is “giving to God the things that are God’s.” And the wonderful thing is that when we do this through song, or through music more generally, it’s just fun. It’s joyful. It’s fulfilling. It’s transcendent. It’s natural. And we find all that inside the box in which the gift of music comes.