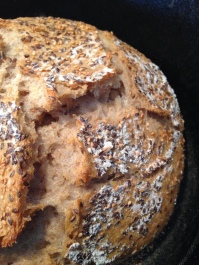 he early church. In the past two I’ve tried to show how these ancient disciples of Jesus were eccentric. They found the centre to their identity outside themselves. They believed their bodies were not their own but were intended as signs of God’s presence in the world and as descriptions of God’s character. Now we move to another chapter of I Corinthians, chapter 7. Our reading came from the second half of that chapter (vv. 29-31).

I Corinthians chapter 7 deals with a question the disciples in Corinth asked Paul about marriage and sexuality. One of the commentators I read this week, Israel Kamudzandu, ended his nice, calm exposition of this passage by saying in an off-handed sort of way that it deals one of the most divisive subjects in the life of the church. As I read those lines, after having decided to preach on this text, I felt a bit as did once when I bought a car. Several days after I bought the used vehicle I found myself marooned at a gas pump, having just figured out that the release lever for filling the car’s tank didn’t work. Things like these would be helpful to know in advance.

Here is how 1 Corinthians 7 opens. Paul writes, “Now concerning the matters about which you wrote.” He then quotes from the letter where they wrote, “It is well for a man not to touch a woman.” Notice this the quotations marks around that phrase (in many versions). Paul is responding directly to an assumption some of them held. This part of the letter is not the result of an early Christian leader sitting down and saying, hmmmmm, I think today I will write an exhaustive treatise on sexuality and marriage. Not at all.

The book of Acts tells us that Paul lived in Corinth for more than a year. He knew some of these people believed that on account of God’s grace they were free to pursue a life of pleasure. A bit like a certain public figure: “When you’re a celebrity you can do whatever you want.” Paul knew disciples in Corinth who thought like that, but he also knew there was a second group that wanted to avoid all things sexual. These were likely married people who had come to believe it was holier to entirely avoid this kind of intimacy. This was the “it is better not to touch” group. As strange as it seems to us, this thinking was not uncommon in the ancient world. Yet Paul, and other early Christian leaders, opposed it. Here in I Corinthians 7 couples were encouraged toward relationships of mutual care. They were even encouraged to take pleasure in each other’s bodies.

That was true, but it wasn’t the only way to be a faithful disciple of Jesus. Paul encourages the Corinthians disciples to value both singleness and marriage. He steers them away from having a singular definition of a good sexual life, whether celibate or married. He says that each has a “particular gift from God.” Here in chapter 7 Paul models the sort of contextual thinking Christians always need to do. Regardless of whether we are in Ottawa or Nairobi we continually face new questions and new situations. Being a disciple of Jesus means we have to improvise in new contexts on the basis of the music others have played before. For some of us it is precisely this chapter, and the kind of thinking displayed here, that suggests it is appropriate to move beyond an exclusively heterosexual view of marriage to advocate for marriage equality for our queer brothers and sisters.

You may be getting the impression that I think there is much in this difficult chapter we could explore. You’re right. But for today our attention is directed toward verses 29 through 31. Let me push us there by invoking a couple of names you might recognize . . . or you might not. I’m thinking of two fairly well-known contemporary Christians: Shane Claiborne and Rachel Held Evans. The Christian popularity machine may have sent their name you way in some form; both have written several books and speak often at Christian conferences.

Someone has described Shane Claiborne as a modern day Saint Francis.

That’s a bit premature but the guy has been an inspiration to a lot of younger folks. He’s a ‘radical’ Christian, a founding member of an intentional community in Philadelphia. He makes his own clothes. He has spent time with Mother Theresa, served with Christian Peacemaker Teams in Iraq. I could rattle off a long, impressive bio of Christian discipleship.

Rachel Held Evans grew up in a conservative Christian subculture of Alabama and Tennessee. She worked as a newspaper journalist for a time. She became well-known in Christian circles for her blog about faith, where she has written about finding a form of Christianity more compatible with questions and less dogmatic. She has also written a satirical book on “biblical womanhood.” Rachel Held Evans has 131K Twitter followers. A lot of people find her inspiring.

A few years ago Rachel Held Evans put her finger on a challenge many of us face: how do we follow Jesus if we aren’t a radical like Shane Claiborne. Maybe a corollary for a previous generation in our Mennonite circles would be how we follow Jesus if we aren’t in a Voluntary Service unit or if you aren’t working for MCC? What Evans noticed was that her spiritual life seemed to have fallen into a cycle. In the first phase she would become convicted about only liking Jesus intellectually. Then she would get serious about reading the gospels and reading books about Jesus by radical folks like Shane Claiborne.

In the next phase she would resolve to sell all her stuff, sleep with the homeless and start a monastic community (just like Shane Claiborne). Then she would realize that her spouse hadn’t read any of Claiborne’s books. And she would remember that they had a mortgage and jobs and children. She would pull back, discouraged and assuming once again that following Jesus wasn’t realistic.

However, eventually she realized that being a disciple of Jesus wasn’t about taking the same vocational path of someone like Shane Claiborne, as respectable as his path might be. Instead, it meant some simple things. It meant trying to love the people she actually knew. It meant caring for the community where she actually lived. It meant living with less. And it meant letting God draw her out of the old space where she felt comfortable.

I admire Shane Claiborne, but I think for most of us Rachel Held Evans’s advice might be more helpful. I also think that it isn’t out of line with the lives of many early disciples. We often have the impression that all the early Christians were itinerant missionaries like Paul. Or we think that, like Jesus, they were all single, dedicated spiritual teachers who wore sandals. We think they all hitched from city to city, living out of a messenger bag. There’s some truth to this: most of them probably did wear sandals. But that’s about it. Our reading today offers us a clue to the real story. It comes through a repeated phrase, the phrase “as though.” It’s an adverbial phrase, if that’s the sort of thing you like to count. (And who of us doesn’t?) The Greek word is ὡς. (Who of us doesn’t feel better with a little ancient Greek thrown into a sermon?)

“As though . . .” The logic is that these disciples found themselves in some context—for example, some were married, some were grieving, some were excited, some had things, some were engaged in politics and business—that context, that life-situation would normally have certain implications. However, Paul is encouraging these disciples to deviate a bit from the standard implications. Being married, grieving, rejoicing, having possessions, dealing with the world would normally mean certain things, but to the followers of Jesus it shouldn’t mean those things.

This Sunday in January is one on which we usually try to remember the importance of being good stewards of our resources. In Acts chapter 2 and 4 we learn that some members of these ancient disciple communities sold everything they had and gave the proceeds to the poor. Paul, doesn’t require this, but he does suggest living “as though they had no possessions.” This “as though” living was a way to acknowledge that everything they had was on loan from God. It helped them be more generous. It helped them be less anxious.

Some of Paul’s buddies were Stoics. Stoics knew that we can’t always control our situation but we can train ourselves to not waste so much time with anxiety.

Avoiding anxiety was one motivation for living “as though.” There were two more and they are both tricky to understand. The first was the belief that the kingdom or the commonwealth of God was emerging. A new era with a new economy was pressing in. They believed the old way of things was in the process of passing away. That belief helped them live “as though” the situations of marriage and grief and joy, even possessions and work didn’t have the implications for them that they had for others. That’s the first thing.

The second thing is a little more perplexing: these early Christians seemed to have believed that Jesus would return to finish the work he had begun within their lifetimes. That’s why Paul seems so conservative here in I Corinthians 7. Mixed in with his good advice about marriage is the claim that if you aren’t married now you shouldn’t bother. They believed the time was short so it wasn’t worth taking on new obligations. This is also why some of the early Christians sold all their stuff. They didn’t think they needed a retirement plan.

This is where most Christians acknowledge Paul’s claim that he wasn’t relaying a definite word from the God here. So we sort and sift his advice a bit. We may believe in Jesus’ return, but we don’t assume it will happen before our credit card bill is due or before our exams. We do get married. We do grieve. We do get excited. We do have possessions. We do work in business and government.

Yet even as we do these things, we are welcomed to carry the same phrase in our heads as the early disciples in Corinth had—“as though.” If we don’t push it away, this little phrase works like a crowbar. It gets in the cracks of our lives and wedges them open a bit. It lets the winds of divine time and divine priorities blow through our souls. It makes us a little less anxious and a little less self-absorbed. “As though” helps us detach a bit from our personal losses and victories. The “as though” crowbar creates space for us to be concerned with serving God, with loving our neighbours and being a little less comfortable.

Look again at our reading. There’s the phrase “as though.” It’s waiting to be picked up, meditated upon and put to good use.