At the church I serve a group of adults has been doing a study on theology and the environment. I’ve been leading other things and have not been able to participate. I wish I could have listened-in somehow. It’s spring here in the lower Ottawa Valley. You would have to make a deliberate decision to avoid thinking about trees and garden plants. The book of Genesis says that God planted a garden with trees that were “pleasant to the sight and good for food.” This time of year that’s not hard to believe. If it’s not true—if it is not the case that in some awesome way a divine mystery has given us plants both beautiful and delicious—then evolution has wrought in us a misdirected instinct. If that transcendent and radically-near event we call ‘God’ has not given us the things of spring, then the beauty we see taking shape, which so readily evokes divine awareness in people of all creeds, has pointed us in the wrong direction.

My commute regularly takes me through Ottawa’s green belt. This is an area of forest and farms, roughly 200 square kilometers, which rings the city. In the past weeks I have noticed some of the trees in the green belt taking off their sweaters. I’ve seen this in a stretch of the highway that subtly shifts to the west. There is no apparent reason for this shift. Only if you’ve been driving this way regularly for several years would you know that it is because an old bridge was replaced. The new one was built just to the west of the old one.

When the new bridge was completed the highway was simply shifted to match. The old stretch of pavement was chewed up by machines and trucked away. New trees were planted on the open land, and for their first winter the pines were wrapped in burlap. This was the protection they were given for their first year of on-the-job cold. As spring progressed I noticed the wrappings begin to sag. Each day we crossed off the calendar, the trees slipped further from their sweaters. It began with a hand poking through, then a shoulder, then a midriff was visible. I didn’t drive the highway for a few days and when I returned I saw all the sweaters were gone. Not a shred of burlap remained. As I zipped past I noticed the wraps folded neatly and stacked on the edge of the old forest. These are tidy trees, and they will, like members all natural landscapes, provide the city’s inhabitants with numerous services. They will invest heavily in water, air and soil.

A seminary-trained preacher would speak of common grace at this time of year. By that term she would not be referring to a second-rate act of God. Common grace is common in the sense that it names these springtime things that apply to us all: streams that run, trees that push new buds, seeds that carry the instruction for turning sunlight into storable power, the sunlight itself. Common grace is a work of God that happens, as the Bible says, to the “evil and the good,” the “righteous and the unrighteous,” and, as the Bible does not say, to the “pope, the porn star and the president.” When the preacher speaks of common grace, she is trying to evoke from us a sense of gratitude for the things we could not do for ourselves. She is cautioning us too, from reading nice weather as divine vindication for our present moral acrobatics.

The preacher might also speak of a naturally-embedded wisdom that undergirds the world and manifests itself through trees and crops. For instance, we have failed to realize that in God’s economy “dominion,” the linguistic source of much consternation in the Bible’s opening chapters, implies grace, mercy and goodness to all. It is precisely these terms that describe divine dominion in that worship source-book known as the Psalms. The New Testament describes Jesus as both the wisdom of God and the one through whom creation came into being. The divinity impressed upon Jesus by the Spirit is also the code with which creation is constructed: love, freedom, humility, service to others. So, the preacher may tell us, creation’s grace may be intertwined with its judgment. Do we not see, she might ask, portents of this very thing? Nature’s wisdom is not one we master. We learn it in humility or it destroys us.

Elsewhere on my drive I see a woodlot being turned into tillable land. I’m told that farmland in the southern part of the province is getting more expensive. As the growing season in this area lengthens, farmers are looking to put new fields into service. By the look of what remains on this stand of trees, however, this will not be the first time this property is used to grow crops. I see only quick-growing poplar and scraggly maple. These are the pioneers of reclamation. When the request goes in for forest to retake field, these are the ones who show up. Now the poplar and maple are being cut down and stacked. I see a bulldozer. There is also a giant orange rototiller mulching roots and stumps. I expect to see a plow on the land before long.

Further on, near another woodlot, I see a yellow feller-buncher. The machine looks like an excavator, but in place of a scoop there is a short-fingered lobster claw welded to giant rotary pizza-cutter. I suppose all this cutting, munching and planting is gardening on a big scale. We chop back weeds and fork over the soil, creating space for planting. We spade in perennials where there was once a path. Genesis tells us that one of our fundamental assignments is to “till and keep” the earth. 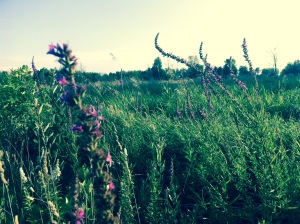 This can, at first glance, seem as industrial as the ‘dozer and feller-buncher. Yet I’m reminded of the way environmental philosophers pick apart our definitions of ‘conservation’ and ‘wilderness’. They point out that even designating something as ‘untouchable wilderness’ is an intervention. It is a deliberate human creation. Even to say that the natural environment has ‘value’ is to render judgment. Both are, in effect, a form of tilling, and both are an intervention. To be a human, to be a creatures at all, is to intervene. This is the underside of the community living things. As I take it, the injunction to “till and keep” is to give a positive moral direction to this unavoidable intervention. Because of our innate power, we humans need such direction.

The joists that support an environmental ethic, in my perspective at least, are several. First, for me there is simply my experience of the natural world. I experience it in the deepest way possible as a good thing. Second, there are the obvious ecosystem services natural areas provide: clean water and air, flood mitigation and so on. On a more theological level, there is in Genesis the divine valuation of the world, even without humans. It was, God is reported to have said, perhaps to the heavenly messengers or perhaps to the triune life alone, “good.” That is a fourth thing. A fifth, is the spiritual value people of all faiths and people of no faith ascribe to the world. The biblical poets are among these. The ancient songs of the Hebrews tell us that the earth itself manifests God’s glory. That is no small thing. Sixth, is a thing specific to the Christian faith, and this is the belief that God’s self-revelation has been mostly aptly rendered, not in text or ideas, but in the flesh and blood, the environmentally-dependent person of Jesus. When I see the trees setting aside their sweaters for the summer, when I get nervous at the sight of industrial power being brought to bear on the flesh of trees—these are the things that come to mind.