The fourth chapter of Luke tells how Jesus went to the meeting place of his home congregation on the Sabbath. He entered the cool limestone building, and as was his habit, stood up to read the scripture. The scroll of Isaiah was handed to him. He unrolled it, scanning until he found this passage, which he read:

The Spirit of the Lord is upon me, because he has anointed me to bring good news to the poor. He has sent me to proclaim release to the captives and recovery of sight to the blind, to let the oppressed go free, to proclaim the year of the Lord’s favor.

After reading this Jesus sat down, but all eyes followed him. He was expected to say more, so he said, “Today this scripture has been fulfilled in your hearing.” Jesus went on, and as he spoke tension began to swirl over the room’s tiered seats. Something sparked it and Jesus was driven out the door and out of the village. Jesus had declared the year of jubilee. He had declared himself a prophet. And he had declared that nobody in his hometown had the imagination to see it.

I’ve taken my title, “Daring acts of ethical imagination” from a short article by the OT scholar Walter Brueggemann. Professor Bruegemann says that the “most dangerous and demanding” teaching in the entire Torah is the set of instructions about the year of jubilee in Leviticus 25. For most of us, this is a rather obscure and rarely-visited part of the Bible.

If you flip through the book of Leviticus you’ll find chapters on how one should deal with various types of bodily discharges, how one should slaughter animals for religious purposes, how women should purify themselves after giving birth, how one should evaluate a variety of skin diseases . . . and then you hit Leviticus 25 and you tumble headlong into economic and environmental policy. You’ll notice two section headings in this chapter: “The Sabbatical Year” and “The Year of Jubilee.” The bit about the sabbatical year is a law requiring farmers to let their land rest ever seventh year. We may might be able to see how this was good environmental practice, but because a family needs to eat every year, it would have taken a sturdy imagination to let fields sit fallow.

The section about the year of jubilee is all about radical economics.

This is what Brueggeman says is “dangerous and demanding.” Here’s how it was supposed to work. If your family got in desperate financial straits and had to sell the farm, it could only be sold for a limited period of time. Every 50th year the land would be returned to its original owners or their descendants. Verse 23 gives the rationale: “The land shall not be sold into perpetuity, for the land is mine; with me you are but aliens and tenants.” The same jubilee arrangement applied to someone who fell into hard times and had to sell themselves as bonded labour. Policy like this “subverts and undermines,” to borrow again from Brueggeman. It subverts and undermines the way we imagine community and economy. Historians are not sure how often the year of jubilee was actually practiced, but I think you can see the way such a policy would keep economic disparity in check.

This is not the only radical economic idea we find in the Torah. Ruth and Naomi were beneficiaries of some related economic policies. Ruth was able to glean—to pick up extra wheat in a field she did not own—because Leviticus 19 commanded farmers to always leave a bit in their fields. Farmers were required avoid enslaving themselves to the goal of maximum efficiency. Naomi was able to keep land in her family because the law said that a relative could ‘redeem’ it (buy it back). The purpose was to avoid having families cut off from the opportunity to provide for themselves.

It is sometimes hard to see through the fog of cultural differences. The cultural context of Ruth and Naomi is very different from our own. However, we can at least see in these policies an outline of the biblical imagination of justice. These policies created avenues for the poor to provide for their needs and made it difficult for any one individual to own vastly more than others. Ruth and Naomi were bold, but they were supported by customs intended to assist vulnerable people just like them. The biblical vision of peace is supported by policies of justice.

This kind of stuff runs all through the Bible. We might think that scripture is a book of the old status quo. In reality the social imaginary of the scriptures is often more radical and more daring than our own. Along these lines, it’s worth noting that Ruth, an ethnic outsider in Israel, would eventually be an ancestor to David. And Matthew tells us that Ruth would also become an ancestor to the young man who ambled in to the synagogue in Nazareth and announced the year of jubilee—the anointed one himself. As much as Jesus was a singular figure, his ministry rode the powerful currents of an ancient image of justice.

One of our best contemporary preachers, Barbara Brown Taylor, was once addressing a graduating class of seminary students. In that celebratory context she, somewhat brashly, decided to discuss the troubling reality of church decline. She described the graphs of church attendance and those who identify as Christians—all sloping downward (at least in the global north). These graphs tend to worry us. They look like a loss of relevance or like declining market share. They look like a brand that has been worn thin.

But Taylor said that she imagines these declining graphs differently. She thinks of them like the graph of someone participating in a weight-loss program or someone whose fevered temperature is finally returning to normal. What makes us think, after all, that the followers of Jesus would ever constitute a majority? Jesus himself only had a few serious followers. And Jesus repeatedly used images of small things to capture the imagination of his listeners: a seed, a grain of wheat, a pearl, a penny.

Do we need big plans to work for peace? How many of those who have even won the Nobel Peace Prize have worked on a gigantic scale? One of the most recent recipients, the Congolese doctor Denis Mukwege, for most of his career has operated on one patient at a time, in one part of the world, mostly treating one kind of injury.

In our gospel reading Jesus wanted his students to see the difference between the powerful who pretended to be faithful and those who really are. He said that the powerful, the scribes in this case, used their positions to “devour widows’ houses.” Maybe they were charging these poor women for legal assistance (which they were not supposed to do); maybe they were stealing from the women’s properties (which they were supposed to watch over); or maybe they were accepting these women’s houses as collateral on debts, debts they would never be able to repay. Whichever it was, these ambitious men were not models of commitment to God.

The model Jesus points out to his students is herself a widow. In Jesus’ day that status made her terribly vulnerable. In a situation where others were making large showy donations, this woman only gave a small amount. Mark tells his readers, who must not have been familiar with the local currency, that the woman gave the equivalent of a Roman quadran. This was the smallest Roman coin, worth 1/64th of a denarius. A denarius was the standard wage for a day’s work. Jesus says that she gave all she had. It was a radical act that didn’t make everyday sense. It required a bold moral imagination.

Whenever I read or hear this story I catch myself adding background to the story so that it makes more sense. 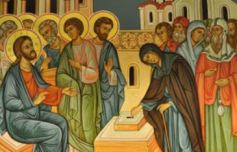 I want this woman to be smart and to be taking care of herself. I want to think that, while she gave radically, she still had enough to pay her rent. I want her to have a rainy day fund. I want her to still have a nice RRSP or a pension. What I’ve come to realize, though, is that my imagination is too tame. Too tame for the sorts of things that lay the foundation for peace.

Periodically I get questions from people regarding the Mennonite perspective on peace and violence. These are fun conversations, I enjoy them. However, very often these conversations come down to the same scenario. The person imagines an assailant attempting to break into their family’s home. Is it not appropriate to put a couple of bullets through the door and drop the guy on the other side?

Though building an ethical approach around a rare scenario is not at all wise, I understand that the question is serious. So I try not to make light of it. For instance, I don’t think it’s fair to respond to a question like this with a quick one-liner from the Bible, even the famous one from Matthew 5: “Do not resist an evildoer. But if anyone strikes you on the right cheek, turn the other also.” The verse provokes the imagination, but I don’t think it’s a sufficient response.

What I think the question about the intruder is really getting at is the shape of our imagination. What I ask my conversation partner to do is just to add one piece of information to the imagined story. I ask them to imagine that the guy on the other side of the door isn’t some stereotype of a criminal. I ask them to imagine that it’s someone they love. Maybe the person has lost control of themselves for one reason or another. Maybe they don’t know it’s your house. Or maybe they do, maybe they do mean you harm—but still, what if it is someone you love? What if the poor aren’t random laggards, but people we love? What if our enemies aren’t video game stereotypes, what if they are people we love?