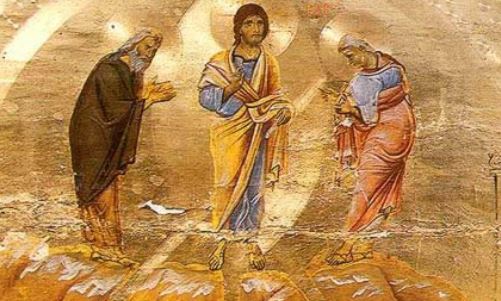 In the middle of Luke chapter 9 we hear Jesus giving his followers some harsh news: “If any want to become my followers, let them deny themselves and take up their cross daily and follow me.” He is telling them, and telling us, that we can’t save our lives by trying to save our lives. If we hold on too tightly, if you try to keep everything under control, we will lose our lives. The liveliness will be gone. We’ll squeeze out the vitality.

Then, a few verses later, Jesus says something really strange. He says that some of the people listening to him will see the “kingdom of God” before they die. Actually he says, they will see it before they “taste death.” They will “see” before they “taste.” It’s an interesting way to put it.

Eight days later Jesus takes some of his closest friends for a hike.

Jesus and his friends hike up the mountain: a pack, an observer might think, of nobodies. If you want solitude you need to go where others don’t. You need to put yourself behind a door or in the backcountry or, in the case of this group, up a steep climb well away from the road.

The answer might be simpler that we expect. Maybe we aren’t told because those who were with him were too tired to notice. They were so overcome with the mundane that they didn’t pay attention. A pack of nobodies in search of some solitude; most of them thinking about grocery lists, schedules and replying to e-mail.

But then, Luke tells us, while Jesus was praying, something changed. Jesus’ face changed; his clothing began to take on a white glow. 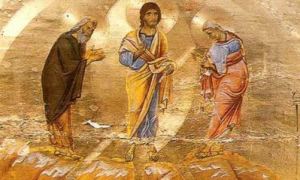 It was as though they were waking from sleep. It was a double wakening. The nobodies were seeing the significance of Jesus. They had only seen a bit of it before. Jesus’s friends were awakened from their self-interest. What they saw was Jesus standing with his peers: Moses and Elijah. He was no nobody. Moses had been in God’s presence, on a mountain in dark swirling mystery. It had such an effect that nobody could look at Moses’ face. It radiated with the glory of God.

And Elijah–Elijah had been taken to God by fiery horses. The scriptures tell us that he was so enveloped by the divine life that he did not taste death.

So there stood Jesus, with Moses and Elijah—with the law and the prophets. A standing meeting, to discuss only the important things: Jesus’ coming work in Jerusalem and his impending departure. For Jesus’ friends it was a vision of the kingdom before the taste of death.

For us it is a timely story. The beginning of Lent marks our journey toward Easter. We put away our ‘hallelujahs’. We put away the baking fat. We will reflect on our habits and our rhythm of life. We devote ourselves to giving and to self-reflection. We contemplate our mortality.

And here in the story of Jesus’ transfiguration, before we taste death, we receive a vision of the kingdom. Jesus is, radiant in glory, transcendent over time, with the law and the prophets, with nobodies like us. This passage beckons us to see Jesus, to wake up from our sleep, to see the glory of the one who will join us in suffering.

Luke’s account continues: Moses and Elijah—those somebodies—prepare to leave Jesus. Peter puts up his hand. He had no idea what he was saying. “Wait, wait,” he says, “it’s good for us to be here. Let’s build some shelters, tents or little cabins, maybe a bunkie. Let’s all stay here a little longer.”

Aren’t there always moment like this, spiritual experiences or times in our lives that we want to freeze dry and shrink wrap and keep forever? We want them to stay with us. We want to remain on the mountain top away from the smell and taste of decay, away from the everyday of stinking fish nets, and farm work, budgets and bylaws and late buses. We want to skip the pilgrimage through the tough streets. Why work when you can maintain the vision? It’s true, isn’t it?

Jesus, Moses and Elijah are peers. They are somebodies together. When their garments glow and dazzle, we are somebody too.

But, while Peter spouts wishful nonsense, a cloud moves in. Maybe it’s pushed up the mountain by warm air or blown in from the sea. It shrouds the group. This is old hat for Moses, happened to him all the time on Mt. Sinai. Elijah—he had at least been carried by that chariot with horses of fire.

For Jesus’ friends it is different. They are terrified. 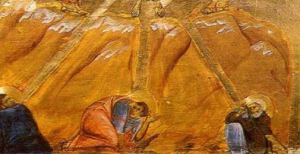 A bit of God’s presence is nice, but more threatens to melt them. It threatens to undo everything they hoped for. A bit of God made them somebodies. It gave them confidence. But a lot . . . who could say what that would do. Others had been killed, alighted like grapes in a microwave.

Then there is a voice and words like these: “This is the One I have chosen. He comes from me. He might not normally look like much, but his presence is my presence. Listen to him.”

Jesus’ friends had heard the story of something similar happening once before. When Jesus was baptized: “this is my beloved, he pleases me.” Actually twice. Long, long ago God had spoken to the ancestors from a cloud on a mountain. But that time God’s words were carried by Moses. The telephone game, because God was God and not be messed with.

The voice quiets. The cloud dissipates. There is only Jesus and his three nobody friends. Luke tells us that they “kept silent.” They didn’t tell anyone what had happened. The vision of the kingdom was just that, a vision—of the future or of the real.

The streets of Jerusalem lay ahead. In them were the trumped-up accusations, the false charges, the misunderstanding of the law and the ignorance of the prophets. The vision of the kingdom would not insulate any of them from the unavoidable struggle, the mundane, being nobody, and eventually the cross.