My household relies on one of those old-style push lawnmowers with rotary blades and no engine. I like it for a couple of reasons. First, it’s quiet: I can mow and still talk to my kids. Second, it meets two needs at once: the lawn needs cut and I need exercise. I’ll admit that it doesn’t always do a great job when the grass gets particularly long. However, the only thing it’s cost us in the last ten years is a little bit of lapping compound (to sharpen the blades).

As I was mowing last week I was thinking about Pope Francis’s 2015 encyclical letter Laudito Si (On Care for Our Common Home). Like most people, I usually think about papal documents as I cut the grass. Laudito Si has been on my to-read list for a while. I tried reading through it online a few times (available here), but because reading on a screen stinks I never finished it. 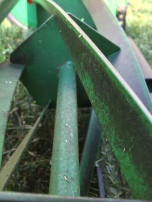 A few weeks ago I bought a printed copy of Laudito Si. It’s a ‘letter’ that reads like a book (104 pages). Having a book in front of me is better motivation than a virtual bookmark. A few people have asked me what I think of Pope Francis’s encyclical. That’s why I was mulling it over as I walked the mower back and forth. Here are a few of my thought on the Pope’s longish letter:

I’m of the conviction that the last few years have shown us (once again) some serious limitations with Catholic polity. My hope is that in the coming years Laudito Si shows us some positive effects of elevating one person and one voice as highly as the Catholic office of the Pope does.