A few weeks back, just before the start of Advent, churches around the globe were reading the first chapter of Luke’s Gospel. The story they were tracking was not yet the birth of Jesus, but the birth of another child—this one named John. The story of John’s birth is interesting. The boy’s mother, Elizabeth, had given birth; her neighbors and relatives were just as excited as she was. They assumed that she would name the boy Zechariah after his father. She refused and insisted that the baby would be named John. In her day a mom didn’t just give a child a nice sounding name that she found on the internt. Kids usually received family names or names with some unique meaning, so the name John came as a surprise.Elizabeth’s friends and neighbors thought she was making a mistake, so they asked Zechariah, the child’s father, to weigh in. He had fallen strangely silent some months ago and needed to write on a tablet to communicate. He wrote, “Go name your own stuff. Our boy’s name is John!” The neighbors took a step back and thought, “This kid’s going to be something special—wonder what that’s going to be.”

Then the gospel writer tells us, Zechariah was filled with the God’s Spirit and spoke a prophecy (Luke 1: 68-79). Yes, Zechariah said, his boy John would be something special. John would be a prophet of the Most High. He would prepare the way for God’s Anointed One. And Zechariah rejoices:

God has looked favorably on his people and redeemed us.

God has raised up a savior, a descendant of our most respected king.

The old prophecies are being fulfilled!

We are experiencing the mercy promised to our ancestors.

Before long, we will be able to serve God without fearing our enemies!

Even now, these two thousand years later, we can still just catch the sense of awe that overtook Elizabeth and Zechariah and their friends. Their lives were being tugged along by the current of God’s great, liberating work.

The account from Luke reminds me—please forgive what might look like a long reach—of the work of J.R.R. Tolkien. Tolkien’s stories explore the themes of this gospel reading like few others. Calling, friendship, adventure, liberation—these themes ring out as Tolkien’s characters crisscross Middle Earth. Hobbits, dragons, wizards, elves, talking ravens, orcs, and prophetic poems—Tolkien’s world is rich and absorbing.

One of the things that makes Tolkien’s books what they are is that the main characters aren’t actually super-heroes. The shortest of the books I’m thinking of is called simply The Hobbit. It runs almost 300 pages, but it begins with humble lines:

In a hole in the ground there lived a hobbit. Not a nasty, dirty, wet hole, filled with the ends of worms and an oozy smell, nor yet a dry, bare, sandy hole with nothing in it to sit down on or to eat: it was a hobbit-hole, and that means comfort.

Hobbits, we learn, are calm, roundish creatures. They are somewhat industrious. They like drinking tea. They enjoy six regular meals a day. They don’t like adventures. Most of them don’t anyway. We learn that one particular hobbit, named Bilbo Baggins had a mother who came from a strange hobbit family that did in fact like adventures. 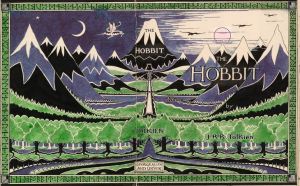 Bilbo’s maternal grandparents would sometimes disappear for months at a time. Their friends would keep the news hushed up. Hobbits were to be respectable, not adventurous. Bilbo believed that he took after his father. In fact he lived quietly, alone in a fine hobbit hole his father had built. It was comfortable, with nice furniture and a well-stocked pantry.

The story really gets going one bright morning when Bilbo is standing by his tidy front door, smoking his pipe. Along came an old man, not a hobbit but a man with a long beard, a grey cloak and tall black boots. Hobbits had no beards and wore no shoes. The man was Gandalf. He was a wizard and very familiar with adventures—adventures and magic and prophecies.

Bilbo is only half convinced—he’s hardly sure he wants an adventure, especially one that gets involved in old prophecies and includes the possibility of never returning to his warm hobbit hole with its teakettle and ample supply of beer.

I’ve told you that the book has almost 300 pages, so you know that Bilbo joins the quest. And, yes, he does have adventures. He’s away for his cozy home for more than a year. Over that time he is often afraid. Bilbo is captured by trolls, and carried aloft by giant eagles. He gets lost in tunnels under a mountain, finds a magic ring, and is nearly killed by goblins. He brokers a daring peace deal between warring armies. His love for his simple home and his simple life allows him to be one of the very few not to become obsessed with treasure or power.

In the closing pages of the book Bilbo returns home to find his neighbors auctioning off his stuff. They had presumed him to be dead. Sometime later, after Bilbo reestablishes himself in his own hobbit hole, Gandalf comes by for a visit. He brings news of the many creatures and kingdoms Bilbo met during his travels. Much had changed—much for the better.

Bilbo mulls this over and eventually says, “Then the prophecies of the old songs have turned out to be true, after a fashion!”

“Of course!” says Gandalf, “And why should not they prove true? Surely you don’t disbelieve the prophecies, because you had a hand in bringing them about yourself? You don’t really suppose, do you, that all your adventures and escapes were managed by mere luck, just for your sole benefit? You are a very fine person, Mr. (Bilbo) Baggins, and I am very fond of you; but you are only quite a little fellow in a wide world after all!”

Bilbo initially thought that because his story featured himself it couldn’t also be about something else. We often think like Bilbo. We think that because we can track our own decisions and because we can give some basic description of why things happened in our lives, that there is nothing bigger at play.

This narrow-mindedness is endemic today. We’re told we are just consumers, just large-brained mammals, just bags of self-interested hormones, just bodies, or just whatever. There’s a large body of literature as well that would give faith the same treatment, saying it’s just a product of history or biology. Just-ism might not be a religion, but it’s certainly a widespread system of belief.

Gandalf tells Bilbo that, even though he was important and loved, the adventure of his life wasn’t just his story. He was indispensable, but the story was a lot bigger than him.

We’re now most of the way through the season of Advent. This is the season of expectation and waiting. It’s a time to prepare ourselves to celebrate God’s presence among us. If our minds and hearts can’t stretch to the point of being caught up in something bigger than ourselves then Advent will always feel shallow.

To follow the story of a child born to an artisan couple who eventually is labelled a king, even described as the presence of God—to really follow that story—our hearts and minds need to stretch to the point that we don’t reject such a narrative simply because if features creatures like ourselves.

This is what Elizabeth and Zechariah understood. They recognized what Gandalf helped Bilbo understand: that their lives were a part of something bigger than their lives. Their lives weren’t just their lives. And their son, the baby named John, wasn’t just their son. The fulfilment of prophecy was emerging from a stump that looked like dead wood. The idea that God would promise something at one time—and fulfill it at another—is tough to take. It means history at large or our own adventures aren’t just luck or individual decisions. It means that, like Bilbo, we are rather little folk in a wide world.

Now, if that was all that was true, then Advent would necessarily have us anticipating good news. To simply know that our lives aren’t just our lives isn’t very comforting. It can be downright terrifying. So here is where specifics matter. What Bilbo found on his adventure was that he was more than he had once thought. What being a part of an old prophecy required of him was being more himself than he had been before. He found that he did have a taste for adventure, that he possessed wisdom and cunning. Before Gandalf had called him, Bilbo did not know that he was capable of playing an important role in an important quest.

Specifics matter in the biblical story too. Colossians tells us that in the life of Jesus we see God. In the life of Jesus we see the church. And we see the reconciliation of all things. In several places the biblical writers sum up the whole, grand story—prophecies and all, brave women and all, stubborn men and all—they sum the whole story up in one word: love. Love is the way to God and love is the way of God to us. This is the irreducible character of the story that claims us.

So, what’s the take away? Well, if you happen to be the sort of person that smokes pipes, then think about Bilbo and Gandalf the next time you do. Or think about Elizabeth, Zechariah and their son John. Maybe pipes aren’t your thing, maybe you like tea. Well, the next time you sit down with a cup of tea invite this cast of characters to join you next time. Meditate on what Zechariah refers to as the “mercy promised to our ancestors.” Meditate on the fact that we really are small folk in God’s, good, wide world.

3 thoughts on “Learning about Advent from Bilbo Baggins”