What is the basic description of our contemporary environmental crises? From climate change to the extinction of species to air pollution to the unsustainable exploitation of non-renewable resources—what stands behind these? Norman Wirzba thinks the central issue is theological. He thinks the root of all these distressing trends it is idolatry.

He makes this case in his 2015 book From Nature to Creation: A Christian Vision of Understanding and Loving Our World. The arc of the book is pretty simple: as residents of modernity we have come to see Earth as a meaningless happenstance of resources instead of as a divine gift. Wirzba writes, “Since we cannot look to God as the source of the world’s meaning, the only place to turn is to ourselves as the ones who will assign to the world whatever intelligibility or purpose it has.” 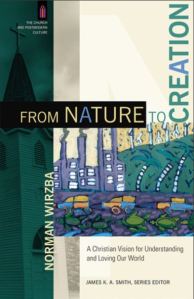 The diagnosis of idolatry is not an evaluation of the world itself. Idolatry is created by the assumptions we hold not by the object behold. There is nothing idolatrous about nature, the idolatry comes through our thinking that we can manipulate nature for our own ends. Wirzba quotes Jean-Luc Marion, “‘The gaze makes the idol, not the idol the gaze.’” The modern gaze turns nature into resources, into economic potential, into unexploited wealth, or, to use a phrase of Heidegger’s, into “standing reserve.” The modern gaze places expectations upon nature that it can’t possibly bear. This is the essence of idolatry.

But is Wirzba right? And if he is right, does it matter?

I see no problem in going along with Wirzba’s diagnosis. We could better protect nature if we stopped assuming that it was ours for the taking. If we believed that our interaction with the rest of Earth’s plants and animals was accountable to an authority that valued those organisms even more than we did, we very well might be more cautious. If we did not expect that our consumptive lifestyle was supposed to provide us with a sense of meaning, we might very well ease up. Wirzba’s analysis also packs a lot of rhetorical power. Idolatry is one of the most serious charges a theologian can submit. However, even with these things to his credit, I’m not sure if I find Wirzba’s analysis altogether satisfying.

Wirzba traces the roots of this modern idolatry to the rise of nominalism in the late medieval period. It was nominalism that drove a wedge between reality and our description of it. What would make Wirzba’s case stronger would be some evidence that before the onset of nominalism and its idolatrous progeny, the situation was quite different. Before the bonds between God’s being and our experience of nature were loosened, were the societies of the West more reverent or respectful toward creation? If there was a difference, is it the type of difference that rules out the more direct effects of technological change? How can we know that pre-modern humans were not just as ready to exploit nature as we are, but simply less powerful? Are we modern people idolatrous in the way Wirzba describes? Sure—but that is not all we are. We are also the possessors of an immense amount of power. We have the power to disturb some of Earth’s most central systems.

I like Norman Wirzba’s work quite a bit. Indeed, one of his prior books, Food and Faith, is one of the best books of theological ethics I’ve read in quite some time. So I wonder if From Nature to Creation might not be a victim of its publishing context. This book is part of a series edited by James K. A. Smith that runs under the title “The Church and Postmodern Culture.” The series is dedicated to linking contemporary issues faced by the church with postmodern theory, specifically with the leading texts of continental philosophy. Continental philosophy has had an enormous impact on the humanities. It is a rich and complex stream of literature chiefly occupied with matters of language, culture, and subjectivity. Continental philosophy is also deeply concerned with ethics. However, I have yet to be convinced that this philosophical tradition is particularly helpful with respect to our environmental crises. For all the continental heavyweights Wirzba engages, Nietzsche, Heidegger, Derrida, Levinas, Marion, Foucault—these voices bring remarkably little to the table. How we see nature (or creation) is important, yes, but the deconstructionists give us little traction to move forward. In fact what is probably Wirzba’s strongest polemic is oriented against Derrida’s claim that a true gift is impossible.

This brings me to my second question related to Wirzba’s analysis. He may be right, but does it matter?  I’m not sure. Again, it is helpful to realize that the assumptions we bring to our “seeing” or “naming” of nature are crucial. But in a world where God is “dead” and corporate worship is taken seriously by an ever-smaller segment of the population, what does the charge of idolatry even mean? Who cares? The answer, I suppose, is that those within communities of faith care. That’s not everyone, but it also not no one.

If Wirzba’s diagnosis is fine but not entirely convincing, what about his prescription? What he wants, and this is not surprising given his analysis, is for us to see “creation” instead nature. Getting to this point requires several things. The first is that we must learn an “iconic” perception of the world. To see the world as an icon is to see God’s grace and goodness through it. It is to see God’s energies at work.

What iconic perception requires is discipline. And here is where I find Wirzba’s work most helpful. Seeing the world as an icon of God is an ascetic matter. It requires the training and organization of our desires. If I was doubtful of Wirzba’s heavy reliance on continental philosophy earlier in the book, here I found it fresh and insightful. Here it’s worth quoting Wirzba at length:

“To see creation means that we need, in ecstatic fashion, to go out from ourselves to meet others on their own terms. [This includes creaturely others.] This ecstatic movement is the movement of self-offering love. Self-offering love is a practical skill rather than merely a pious sentiment. To practice it, disciples need to learn the arts of neighborliness, arts like home construction, food production, machine invention and repair, medicine and healthcare, town planning and design . . . .”

It’s along these same lines, that Wirzba commends the practice of gardening. Gardening is as simple as it is global. Gardening that attends to both the health of the land and the health of humans is a way to experience of the rightly ordered relationship of human being and the rest of creation. Through gardening we learn to perceive the world rightly. We learn, for instance, that fertility requires death. We learn that we are creatures, part of creation and dependent on much that is beyond ourselves. We learn that being eaters connects us to a host of neighbours that the modern economy strains to keep from our view. Gardening is a joyful and ascetic practice.

The reason that I find Wirzba’s reference to asceticism so helpful is that I see no other way forward. Not only must we learn to see the world as creation, but we must also learn to curb our ambition and power. What history has shown is that efficiencies in production lead to more consumption. I see no reason to believe that lowering the environmental impact of certain key parts of our economy will not create a rebound effect of increasing consumption yet again. If we can buy carbon offsets for our flights, will we not see this as license to keep flying? If our mines emit less GHGs will we not keep right on mining—maybe even increase the pace? We moderns require a life-giving asceticism. There is no other way. The formation of desire is of paramount importance.

Wirzba’s recommendation of gardening and mindful eating are ascetic practices oriented to form the self, to shape desire, and to teach the art of iconic seeing. Practices like these, iconic seeing itself, lead to thanksgiving. Wirzba writes, “To give thanks means that each thing is no longer simply a material entity susceptible to measurement, manipulation, and possession, but is instead the sensory manifestation of God’s desire that it should be and should thrive, and thus worthy of our commitment to participate in its flourishing.” To return to another significant theme in From Nature to Creation, these practices shape the imagination. I wish Wirzba would have returned more directly in this theme in the book’s latter chapters. As important as the ascetic angle is, I think it could have been more positively drawn out through a return to the language of imagination. I think the sort of fulsome creaturliness that living in creation (instead of nature) requires must be ignited by lived examples, by ecological saints whose lives are magnetic—who inspire the imagination of more than a monkish few.