What would you think if I told you that being a Christian meant being eccentric? I imagine that sitting in a church, you might look around and say that seems about right.

The word eccentric can mean being a bit unusual or a little odd, peculiar maybe. Another way to define the word, and this is more helpful for our purposes here, is to say that something eccentric is off center or maybe that its center is found  beyond itself. 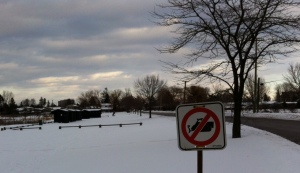 My sermons in the next few weeks will explore a common theme: the way in which the lives of early Christians were ‘eccentric’ in just this sense.

We begin today by looking in on the lives of a group of early Christians in the ancient port city of Ephesus. We glimpse them through the book of Acts. Acts is Luke’s history of the early church. In the first half of Acts Peter is the main character and the disciple communities are primarily Jewish in origin. In the second half of Acts Paul is the main character and the communities are increasingly non-Jewish or gentile in origin.

In verses 1-7 of Acts 19 we see Paul in traveling mode. He has arrived in Ephesus, on the western coast of modern-day Turkey. He finds that there is already a group of disciples in that city. He wants to understand them better, so he asks them if they have received the Holy Spirit and if they have been baptized. He learns they have embraced the call to repentance preached by John the Baptizer, but they seem to know nothing about baptism in Jesus’ name.

Right here we notice that one of the keys to understanding the lives of early Christians is to recognize the importance of this strange, eccentric ritual, the ritual of baptism. Baptism is essentially a public bath. That is strange, but rituals themselves aren’t strange at all. All people and all cultures have them. Rituals are things we do that mean much more than they appear to accomplish physically. We stand for a national anthem, for instance. We shake hands when we meet someone new.

If you think about the ritual of the hand shake from the eyes of an alien anthropologist you’ll realize that it’s clearly more symbolic than practical. Originally the handshake, that ritual of greeting someone your dominant hand open and empty, was probably a way of signaling that one wasn’t holding a weapon. It has evolved to mean more than that. In a similar way, while washing is obviously a way to get rid of grime and disease, for Christians it quickly came to mean more than that. The same was true for ancient Jews.

To ask to be baptized didn’t mean you knew exactly how the rest of your life would unfold. It didn’t mean you had all your questions answered. But it did mean that you were taking the active step to saying that you wanted others to keep telling you the story of Jesus. You wanted to walk through life alongside people of faith.

The other side of baptism comes into view when we realize that baptism was never something an ancient Christian would do for herself. Baptism was something one received from the church. That’s because early Christians believed their way of life was founded on something done for them, not something they did on their own. Their following Jesus began in grace. In baptism the church wants you to feel what is true even though it is invisible, which is that God’s love is cleansing and rejuvenating. Baptism seems a strange, eccentric practice today because the community we join isn’t founded on the contemporary assumption that we create our own lives.

The problem for the women and men in Ephesus was that they had undergone an outdated version of the ritual. It would have been a bit like booting up your PC with Windows 98. They had received the baptism of John, not that of Jesus. To understand more we should turn to our gospel reading, Mark chapter 1.

Here we learn that John the Baptizer was a wild man. He lived in the wilderness. He wore rough clothes and ate the fruit of the land. 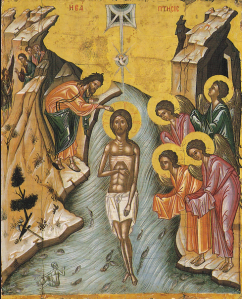 The passage says that John “was clothed with camel’s hair, with a leather belt around his waist, and he ate locusts and wild honey.” Mark highlight this part of John’s description because it connected John and his ministry with an important biblical prophecy.

In II Kings chapter 1 we read that Elijah was a hairy man with a belt of leather. I have no idea if that was a compliment or not. Being hairy these days is generally frowned upon—to the delight of companies large and small. Most senators in ancient Rome had to be clean-shaven, but I don’t think there was any such requirements for the much older Hebrew prophets. They could have been hairy (they could probably even wear lumberjack shirts and leather boots).

Here’s why this matters: the central question of Mark’s gospel is about the identity of Jesus. And one of the clues to how early Christians answered that question comes right here in the first chapter. Before Mark tells us about Jesus’ baptism he tells us that John the Baptizer wore a leather belt and camel’s hair: John is Elijah; Jesus is God’s work of justice. This was Mark’s message.

The gospel-writer tells us that Jesus came to John in the river Jordan and asked to receive baptism. He tells us that as Jesus came up out of that water the Spirit of God descended like a dove and a voice from heaven spoke (loud, soft, booming or rustling, I don’t know) but the divine voice said this: “You are my Son, the Beloved, with you I am well pleased.” And at that moment the way in which Jesus understood himself and his own calling probably shifted into a different gear.

We might say that both John and Jesus, the baptizer and the baptized, were eccentric people. That is, they believed that the most important part of their identity was not in what they found inside themselves, but in how they fit into the divine life. They believed that it was in their connection to God’s mission of love and justice that they found their true selves. I think this is what we saw during Advent in Mary’s life as well. She was an eccentric too. She found her identity in God’s life and in God’s mission of reconciliation. Jesus, John and Mary all found themselves most concretely outside themselves within the story of God’s reconciling work.

As we turn toward a close, let’s look in on that story of the early Christians in Ephesus once again. These women and men knew of John’s baptism. Yet John himself said that though he would baptize with water, the one who followed him would “baptize with the Holy Spirit.” Paul tells the disciples in Ephesus that their experience hadn’t been fully optimized. So, we read, “On hearing this, they were baptized in the name of the Lord Jesus.”

Eccentric again. They are baptized not under their own personal brand, but under that of Jesus. “Personal branding” is all the buzz in professional circles at the moment. Surely there’s a good place for that, but for the early Christians following Jesus meant that they found meaning and identity and a way of life as they placed themselves under the label of the Everlasting God’s activity in the young person of Jesus.

One of the benefits of finding your center outside yourself is that it allows you to undergo all kinds of challenges and instability without losing your center. Centered in God—the God revealed in Jesus—we are more resilient and more durable than otherwise. This leads us to notice one more element of eccentricity in the lives of these early Christians. Look at the last two verses of our Acts reading. That’s verses 6 and 7.

This is what John predicted. He saw it coming like a hurricane gathering strength over the ocean. The power of God’s work in Jesus would be a power beyond personal intention. It would be the power of the Spirit of God. The eccentricity of early Christians wasn’t just in their choice of claiming a center in God it was also in the power of something greater.

For early Christians, to be a follower of Jesus was to be imbued with the power of God’s Spirit. The Spirit who is the part of the trinity that pulls all of history toward culmination in God.

The Spirit who is the part of the trinity that pulls life forward and upward. The Spirit who is the force of life itself. In the early church the signs of the Spirit’s work were things like speaking in foreign tongues and words of prophecy. There are many churches that still experience these things. These signs encourage believes because they remind us that there is indeed another Spirit at work in the world, a wind of life and healing. Things are not just what we make of them, but also what God makes of them.

As we move into a new year, I encourage us to let go of the trivial things we toted around through 2017. The stuff in our lives that seemed important for only some silly, barely conscious reason. Maybe it was a desire to get even, win in office politics, prove ourselves again or get our due in some petty circumstance. These little, destructive, minor anxieties that define our approach to the day-in and day-out of life—it’s a good time to let go of those. It’s a good time to find a new center. And it’s a good time to replace those little worries with a desire to see God’s Spirit at work in our lives and in the lives of those with whom we rub shoulders.